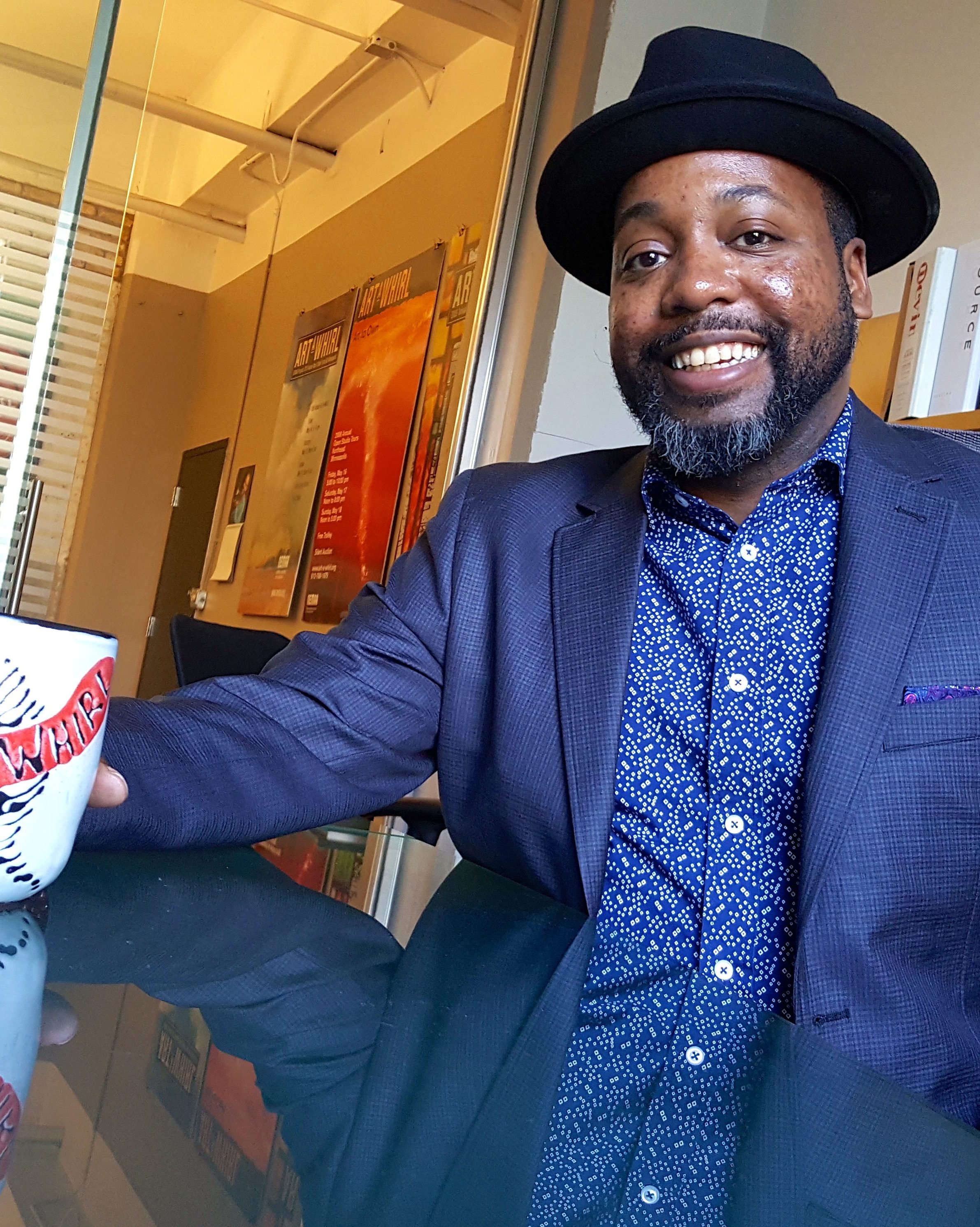 Disruptive Philanthropy can have many different definitions.

The Council defines it as ‘a transformative event or moment, an act of giving and relationship building that is a departure from the status quo. It may not be easy, endorsed or comfortable, but it is necessary to inclusively create a shared vision, a new sustainability, innovation, imagination and growth.’

Dameun Strange sees Disruptive Philanthropy come to life in his Ron McKinley Philanthropy Fellowship at the Bush Foundation (our presenting partner for this year’s Annual Forum). The Ron McKinley Fellows infuse the philanthropic leadership of Minnesota with not only an array of diverse new faces, but also the voices and ideas of people who aren’t normally heard in a traditional room of funders.

Dameun as a table guest at the Annual Forum 2013

Dameun self-identifies as one of those voices. Originally from Washington D.C., he moved to the land of snow and hot dish to attend Macalester College. Once here, Dameun fell in love with the collaborative arts community of the Twin Cities and more recently his vibrant Frogtown neighborhood. Since his move, Dameun has worked with organizations like MN UNITED, ACORN and Grassroots Solutions. He is also a member of our Advancement Committee here at Charities Review Council, and he is a founder of Hopewell Music Cooperative. His work has been primarily as a community organizer – working on the ground with the people who are taking action to change their community.

Dameun felt himself drawn to philanthropy while working as an Engagement Lead on the Forever Saint Paul Challenge – a community problem-solving challenge aimed at all of Minnesota, asking “What would you do with $1 million to make Saint Paul great?” After thousands of ideas from across the state were submitted, the community was able to vote on the one they wanted to see in action.

This was a departure from the status quo – funders normally rely on the ideas of upper level leadership and make their own decisions about where their gifts will make the most impact. With the Forever Saint Paul Challenge, Dameun saw what equitable philanthropy could look like, (bringing the biggest decisions back to the communities they are affecting), and he thought, “Maybe if I work in the field I can push it in that direction or shine a light on the value of that kind of outreach.”

What exactly does he think needs to be pushed toward change?

“The power dynamic” Dameun explained, “I would like that to change. You want to hear how we’re doing (at the Foundation as a grantmaker) just as much as we want to hear from nonprofits how their work stacks up.” To him, the future of philanthropy lies in mutual accountability and trust between engaged donors and strong causes.

As a Community Innovation Fellow he is almost always on the ground, having real conversations with the people who are organizing change. “We don’t want people to feel like they have to jump through hoops to impress us,” he said of the organizations he works with. He sees the ideal power-dynamic as a round table, where there is an equal exchange of ideas and resources between donors, funders and nonprofits.

“Money doesn’t have to equal power.” Dameun explained, there is just as much value in the knowledge and expertise people at the grassroots level have about their communities and the issues they are confronting as there is in the dollars that fund their ideas.

Dameun dons his Changemaker helmet at our Open House, November 2013

So how do we change that power-dynamic?

That will depend on how good of listeners we can be. Can we evaluate our own work critically to inform and improve our philanthropic processes? Dameun’s role as a Fellow is the beginning of this shift to a new way of funding. His biggest and favorite part of the job is hearing people’s stories of hard work and innovation and being able to say “Yes, apply! Or, that’s not exactly what we’re looking for, but here’s another resource for you to try.”

The inequitable power dynamic between people with big ideas and the foundations that fund them is a major topic he hopes to see addressed at the Annual Forum. He thinks if we “work together as a field” by having a collective conversation, “we can even the levels and make [giving and funding] more balanced.”

Our mission at Charities Review Council aligns with this value; we work to give nonprofits the tools to strengthen their capacity for mission engagement – to make the donor/nonprofit relationships more accountable, equitable and successful. That is why the Council has designed this year’s Forum to be a gathering of influencers, community organizers, foundation leadership, caring donors, and generous business professionals. All are invited to attend, imagine, create, and build a new road for philanthropy so we can do even more good together.

Dameun wants guests to leave the Annual Forum with the idea that “there can be a whole new model” of giving, and he wants them to feel “inspired to engage and take that change into their own hands.” Just as he saw his personal power called towards the push toward a more equitable giving arena, he hopes that the Annual Forum with its theme of Disruptive Philanthropy, can give that sense of personal accountability to each of its attendees.