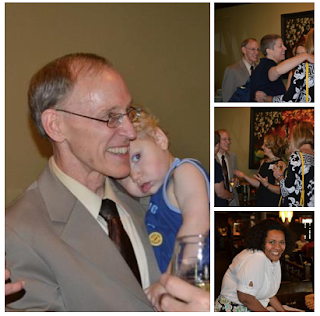 Yesterday Charities Review Council celebrated and said farewell to Rich Cowles, our executive director for the past thirteen years!

Wednesday night at Mai Village in St. Paul, we recognized and remembered the leadership of Rich. If you weren’t able to join us, here are some highlights and make sure not to miss all the photos in our Facebook album!

Heidi Neff Christianson, our current board chair, announced that we met our $10,000 goal for the “Make It A Rich Legacy” campaign and thanked all those that gave in honor of Rich. She presented Rich with a guest book for his house, so all those who visit him in the coming years can write their memories and stories. In her closing comments, Heidi recognized Rich as a “true servant leader.” Following Heidi, each board chair that served under Rich’s tenure took the stage from past to most current:

David Brown:
Reminiscing about an era pre-Google, Facebook, and social media in the late 90s when he was board chair, David said with a laugh “We knew we had many issues to solve, so we hired Rich Cowles.”

Tom Schroeder:
“Rich was our noble leader, always keeping the board calm and focused and staff working for the mission.” Tom joked about his and Rich’s breakfasts together which included more philosophical conversations than work. And in reflecting on the Council’s legacy of past board chairs and executive directors noted, “We stand on the shoulders of giants… Rich, welcome to being a giant.”

Deb Ruegg:
Not having realized that being asked to be vice chair of the board eventually meant being chair, Deb joked “I was a reluctant chair, but I think we did pretty well, Rich.” Reflecting on Rich’s leadership skills, she first thinks of his vision, then his integrity, dedication, and most of all his sense of humor.

Julia Classen (while unable to attend, Deb Ruegg shared her comments):
“I know Rich will say something about how we all have played a role in the success of the Council, but let’s not be fooled this time. Let us all acknowledge that Rich is a wonderful, talented leader that really does deserve the spotlight.”

Jim Toscano:
Jim opened his remarks with “Most of all, I cherish that Rich is my friend.” He chose three fitting C’s to describe Rich: citizen, character, and courage. Highlighting Rich as “the guy who actually made diversity work—not just a symbolic gesture” and that “we are a new organization today because of this man.” And with laughs, he ended with “Godspeed, God bless, and be my friend forever.”

Steve Joul:
Adding to previous remarks, Steve said that “Rich has a quiet sense of leadership that didn’t need to use flashy words—I found this to be so empowering.” He went on to comment that “I saw Rich as my mentor, even though I was the chair of the board” and that “as a member of the foundation world, I am ever grateful for Rich’s work. One of the highlights of my life has been to serve on the board of the Charities Review Council.”

Cindy Kleven:
Representing the current board, Cindy elaborated on Rich as a thoughtful leader who cares deeply about his staff. She recognized his thoughtful navigation of the organization from a watchdog to guide dog. And ending on a personal note, she talked about her involvement in the cultural competency committee saying “I’m sure many of you would say the same thing: Rich saw things in me that I didn’t see in myself.”

Then, LaVon Lee and Patty Wilder, current board members, presented “Our Father’s Eyes” Native American blanket to Rich, to honor his time with his family and grandchildren.

To conclude the program, Rich finally had the chance to say a few words of his own.

“The only one thing I can take credit for in all of this is getting good people involved with Charities Review Council. Be well, keep in touch, and meet all standards.”

On behalf of Charities Review Council and our extended community, again, thank you, Rich, for everything you’ve done to improve the sector. Enjoy retirement, your grandkids, writing, and whatever else you choose to do!

COVID-19: A Message for Donors

A BIG Welcome to our New Board Members